September is not quite upon us, and yet I sit here surrounded by silence. Why? Because today is the first day of school. If you’ve followed this blog for a while, you’ll no doubt be surprised at a first-day-of-school blog appearing on the actual first day of school. It hasn’t happened before.

Two years ago I admitted there would be no fancy proof or polished pictures to attest to it, but I Have Kids, They Go to School. Last year I was excited to share with you that not only do I Have Kids, They Ride a Bus. Life. Changing. My four children did not have a single late day on their report cards all year long. (We’ve had school years where late days inched frighteningly close to 50% so this was a big deal.)

This year, I am reporting to you on the first day of school, that I still have kids, they still go to school, and they still ride a bus. If that doesn’t impress you as much as it does me, let me break it down for you.

It’s the first day of school! You’re smart people. You’ve probably figured out by now that I’ve impressed myself with pulling off a memorial to the occasion on the actual day of it. I have pictures that include all four kids, the dog, and even the bus! 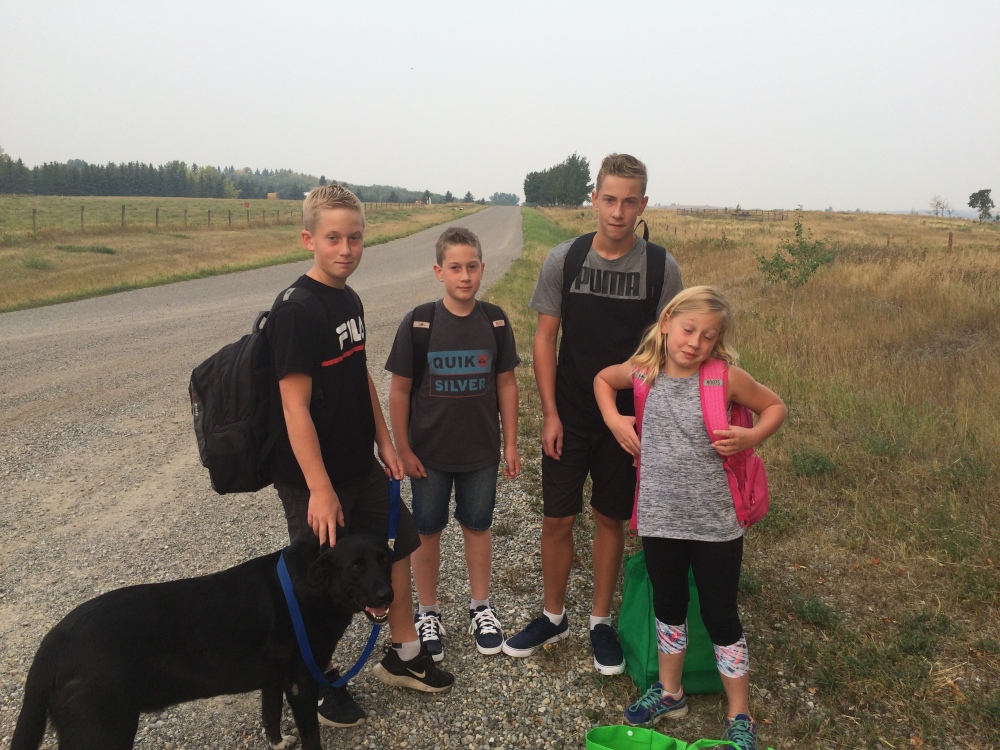 (Okay, so they’re not posed or perfect, but let’s be real. My kids are at the stage where pictures they haven’t taken themselves are lame, so any picture with all four of them and mostly looking at the camera is considered a win.)

I still have kids! We’ve arrived at the end of two months of constant companionship. Every day. Mostly all day. Even the night. Because going to bed before the sun sets during the summer is abject cruelty and there are no exceptions. Not even for children who live with their parents in a land where the sun does not go to bed until after the parent’s brains do. I warn them to go to bed because crazy lady comes out before it’s dark, but still they tempt fate.

Two months have passed and today we were still sharing hugs and smiles. They left the house excited about finally getting a bit of a break from each other. But they still promised to look out for each other. I sent them off without me. But I will be here, waiting for them to come home. We’re in it together. Imperfectly. Often ingloriously. But together.

They still ride a bus. Our first morning back to school went really well. We kind of rocked it. Their breakfast had spinach in it! (Isn’t that ridiculous? There has got to be some sort of award for moms who feed their kids spinach on the first day of school!) Their lunches achieved the perfect balance between me feeling happy with the contents and them still being excited to eat it. They all wore clean clothes. We found the dog leash before panic mode set in and we made it to the bus stop on time.

And the bus stopped, opened its doors and let my children in, then took them safely where they needed to go.

That is a beautiful thing.

I exceeded my expectations today, but I still managed to mess up.

You see, even though my kids rode the bus to school, I hopped in the van and drove to school too. I wanted to be there to make sure they found their teachers on the playground, to give them one last hug, and to watch them walk inside.

It was only after I’d accomplished all that, I noticed my van in the parking lot. I hadn’t wanted to deal with the complexities of precision parking on this particular morning, so I parked off by myself. Out of the way. Where there wasn’t the opportunity to get into trouble.

Somehow I still managed to back my van into one of the only stalls with a light post. And I backed my van right into the light post. Yes, I have a backup camera. No, I clearly did not avail myself of its assistance. In explaining why this was the case to my husband, I said that I didn’t perceive the possibility of danger. I thought I was safe and didn’t need help.

I impressed myself this morning because I showed some growth. But then I messed up where I didn’t expect to. That is why the Gospel is such good news.

Rescue is just a breath of faith away.