It was a lazy Saturday. There was nowhere we needed to be and what ‘needed’ to be done had been determined by us, it wasn’t dictated by outside parties. The children milled about doing odd jobs and odder activities – one was wearing pajamas and rubber boots and burning things in the fire-pit, I busied myself in the kitchen with the contrary activities of cleaning and baking, and Rob puttered around in the Bobcat. He said it was to clear snow, but our mostly clear driveway made me wonder if he was really just playing with his favourite toy.

It was then we were interrupted by a call for help.

On the other side of my ringing phone was a desperate friend. She needed help, but she was pretty sure I couldn’t help her. My friend reached out to me with the thin hope that Rob was home.

As a fan of irony, I loved that this friend had been at my house for coffee two short days before, and when my husband had come up in the conversation, we laughed at how a mutual friend had referred to him as Snuffleupagus. Not as a term of endearment or a reference to his appearance or character, but because she’d heard me talk about him a lot but she’d never actually seen him and was starting to wonder if he existed.

If you are confused about who or what a Snuffleupagus is, it’s a character from the show, Sesame Street. He’s a friend of Big Bird, and for twenty episodes, though she speaks of him affectionately, the humans in her life never see him. They wonder if Snuffy is only a figment of her imagination. (As an interesting aside, in the first season, Snuffleupagus was afraid of fruit and wanted to move in with Big Bird. I have oft warned my husband about the dangers of scurvy because he mostly avoids fruit, and if I am the Big Bird to his Snuffleupagus, almost 22 years ago, he expressed interest in moving in with me and here we are 21 years and four kids later. But I digress.)

The call for help came because my friend had gotten her car stuck in a snowbank very close to our house. She’d heard some of my driving stories so wasn’t asking for my help – she knew I was not a reliable source of it. She called because just maybe Snuffy existed, was at home, and would answer her call.

Rob was quick to say yes. She’d said she was in pretty deep, but he’d dealt with me for over two decades, so thinking she might not be as stuck as she sounded, he called one of the boys to join him in case all she needed was a push.

She’s a laugh a minute, so I looked forward to hearing how the experience unfolded. I didn’t have to wait long for them to return. When I asked how it went, my son was first to respond. He shook his head and remarked that she claimed to have backed into a snowbank, but he wondered if maybe she’d taken speed and driven straight into it instead. Rob gently reprimanded him saying, “Hey, if she’s asking for help it doesn’t matter how she got into trouble, it just matters that we can get her out.”

I chewed on that sentence for the rest of the day. Living in community well is a vulnerable endeavour. It exposes us. Sometimes we are the ones who get the cry for help and can respond. But just as surely there will be times when we will be the ones in need of help.

Responding to need doesn’t require a lot of trust.

Crying out for it does.

When my friend reached out that Saturday, she called because she trusted that the potential for help existed and that it would be delivered with kindness.

If we live in community but we’re crippled by the fear that cries for help will be met by judgement, most times we will remain silent. If we live in community believing we are the preferred first response team, that we’re the ones with the solution to every problem, we might be quick to arrive on the scene when help is needed, but we can also get tangled up in pride, tempted to pick apart the situation looking for ways the ‘helpless’ could have avoided their problems to begin with.

This is where grace comes in. 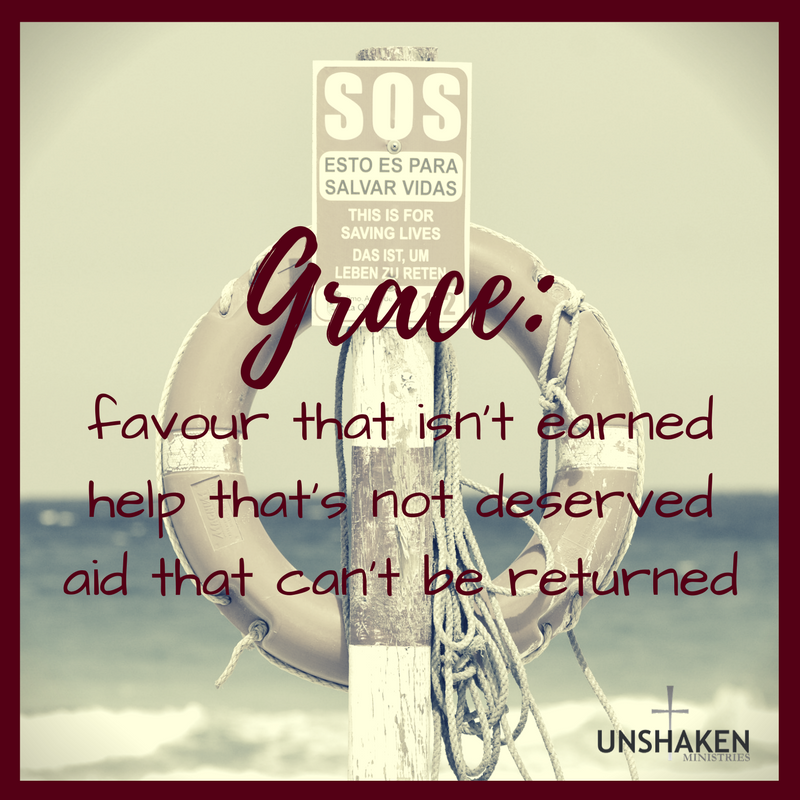 Living in grace towards each other makes community a safe endeavour. The promise of grace takes the fear out of being exposed.

Doesn’t this make you feel warm and fuzzy? That’s how I felt that Saturday when we were able to help my friend. I felt that way because I love her and helping her (yes, vicariously) brought me joy. But if I stop here, my story is both incomplete and imperfect. You see, no matter how deeply and how well we love each other, we are all in trouble that’s bigger than our ability to help each other.

Ephesians 2:1 says we are dead in our sin. Dead people have got nothing to offer. They can’t do a thing. They have no ability to solve their biggest problem – that they are dead.

I like to tell my kids to keep their eyes open for big but’s in the Bible; they remember that one. Ephesians 2:4-5 gives us the big but.

But God, being rich in mercy, because of the great love with which He loved us, even when we were dead in our trespasses, made us alive together with Christ – by grace you have been saved.

In the most ultimate undertaking of community, God brought us, who were separated from Him through our own rebellion and dead in our sin, back to life and then welcomed us not just into His community but into His family. That’s the good news – the Gospel. When we were in most desperate need of help and completely incapable of helping ourselves, God responded in rich mercy, great love, and generous grace.

That is why the apostle Paul, as he faced imminent death, could say with confidence:

But I am not ashamed, for I know whom I have believed, and I am convinced that He is able to guard until that Day what has been entrusted to me.

He knew who God is: rich in mercy, great in love, generous with grace. He knew what God did: made dead people alive through His Son, Jesus. Paul knew God wasn’t a divine Snuffleupagus who couldn’t really be trusted to show up on the scene, rather Paul was convinced that this God was a sure and safe place to run for help. A safe grace.

And so, as he prepared to die, he said to Timothy, the man who was like a son to him, be strengthened by the grace that is in Christ Jesus. (2 Timothy 2:1) Don’t look only for strength in the incomplete grace we can offer each other, look beyond it to find strength in the grace of Christ Jesus. The One who, having all strength, did not uncover our helplessness, poor choices, bad decisions or wrong actions to shame, but who instead covered them with grace.

Be strengthened by the grace you’ve received and then be a stream of it to others. Let what has come to live in you, flow out of you washing those around you with rivers of grace.

2 thoughts on “Strengthened by Grace”