I was a first year teacher and teaching in another country. (Yes, at this point you are probably wondering what made me think I had things under control.  You would be correct.)

Having prepared my classroom for the day, I ducked into the staffroom to quickly refill my water bottle.  The staffroom was crowded so I decided not to linger.  As I was heading out, a friend of mine from the neighbouring classroom reminded me to check the info board as there was going to be a drill sometime in the morning. There was a crowd in front of the whiteboard, so I shrugged off her warning, thinking, how hard can a fire drill be, right?!  (They do them in Kindergarten, I was pretty sure I had this!)

The students filed in and I walked them through the morning routines, and then announced with great enthusiasm that today was going to be a special day.

They gazed up at me with shining eyes, drinking in my wisdom. They adored my “American” accent, and found my strange ways endearing.  I was confident this would go off without a hitch.

I told these dear children all about the fire drill and the importance of a swift response. I stressed that when they heard the alarm, it was imperative they immediately line up with their buddy and march silently out to the playground.  There would be no stopping for shoes or jackets.  What if this were a real fire?

The children nodded, they were taking this very seriously. My classroom assistant was also listening, but she appeared puzzled.  The morning progressed, and she kept attempting to pull me aside.  It was a large class with many students who needed us so we did not have time to discuss the upcoming alarm.  I confess to feeling somewhat annoyed by how confused she was with such a simple procedure.

The morning continued in a mostly pleasant and orderly fashion when suddenly in the midst of Mathematics a faint, unimpressive beeping sounded over the speakers. Having been in England for a while, I already knew their emergency sirens sounded different from our hearty Canadian counterpoints, so while I was concerned that we would never have heard the alarm except that we had been listening for it, I was immediately propelled into action.

I signaled the children to abandon their numbers and line up at the classroom doors with their buddies. Much to my delight, they swiftly rose to the challenge.  Despite the cool grey drizzle, they shunned the coat rack of jumpers at the rear of the classroom and began marching silently out into the elements.

There was only one small hitch. My classroom assistant kept trying to pull me aside and TALK to me.  She seemed utterly befuddled as to why I was marching these children out into the rain in nothing but their smart little uniforms.  I raised my finger to my lips and shushed ominously, quite taken aback that despite my careful instruction on the importance of silence just hours ago, she would not stop whispering at me.

Brow furrowed, she followed us outside shaking her head. Just as I was closing the door behind the last pair of students, the music teacher came upon our silent parade.  He loudly informed me that one of the students needed to come with him for a private lesson.  My eyes bulged at the sheer horror that he expected to maintain his schedule while the school burned.  Using very stern hand signals, I clearly indicated that he was to follow me out to the safety of the playground and remain silent.  His eyes grew wide in wonder but he joined our procession.

As we neared the safety of the playground, my second classroom assistant came flying out the door towards us. She had missed the first part of the morning and so was completely out of the loop.  She quickly caught up with the first teacher aide and I overheard them sputtering about my unconventional methods.  I fumed silently that neither of them had bothered to read the white board in the staffroom.  Had they done so, they would have known about the fire drill and been able to work together with me rather than against me.

At long last, we reached the corner of the playground and I began an enthusiastic roll-call. I lavished praise upon the children.  It was our first fire drill of the year and they had performed spectacularly.  Despite opposition from the camp I’d least expected it, we had arrived outside mostly silent, and in perfect form. 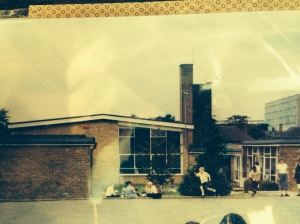 In fact, we were the first class to do so. We cheered heartily, impressed with our accomplishments.  The two teacher aids, and the music teacher looked on in bewilderment; I would deal with them later.  Oblivious to the fact they were quickly getting soaked, my students waved happily at their schoolmates who peered out the windows from inside their classrooms.

The playground was surrounded by windows on three sides, so we could see with mounting concern that no other classes were coming to join us. Seizing upon this teachable moment, I impressed upon the children, that were this an actual fire and not a drill, their schoolmates would indeed be in grave danger.

I was getting quite chilled, and starting to wonder how long British fire drills actually took, absently expounding on the dangers of remaining in a burning building to pass the time, when my sweet Irish colleague who had warned me earlier that morning, came running outside. She pulled me aside, and gently asked me what I was doing with my students in the rain without their jumpers.  I whispered back with some concern that we were waiting for the rest of the school to join us, but it seemed to be taking a while.  Puzzled she questioned why anyone would join us?  I reminded her that she had been the very one to draw my attention to the whiteboard message informing us of the morning drill.

At this the dear lady threw back her head and laughed in a much more “American” than British fashion until tears mingled with the rain drops pouring down her cheeks. When she could finally speak, she choked out that the drill, was merely the phone company testing out the phone lines and the school speaker system.  Had I had read the whiteboard, I would have known this.  In fact, the school had never had a fire drill as each classroom had a door that led directly to the outside.

Attempting to keep a stiff upper lip, I again thanked the children for their cooperation, and informed them that this preparation, while not needed today would serve them well in life. One never knows when they may have to flee a burning building in an orderly fashion.  I marched them back inside and turned to face the music teacher and teacher aides.  I apologized profusely for my behaviour, and thanked them for their understanding.  They laughed, more at me than with me, but it was well deserved.

I wish I could say that the experience was the only lesson I needed in the value of listening to wise counsel. I wonder how many of us feel too busy to get into the Word.  We may not want to admit it, but I wonder how many times we are pretty sure we know what the Bible says without really reading it.  How many times are we sure that we have our situation in hand, and don’t need to get our ‘daily instruction’?

I wish I could say that my ears stay tuned to the voice that whispers, “This is the way, walk in it.”   Unfortunately, there are still too many times I try to lean on my own understanding.  But, wonder of wonders, He still whispers and works to straighten my path.

Proverbs 3:5-6 Trust in the LORD with all your heart, and do not lean on your own understanding. In all your ways acknowledge him, and he will make straight your paths.